35 years of Hospital Radio in Dorchester

The picture and article below appeared in the DORSET ECHO on Saturday August 25th, 2001 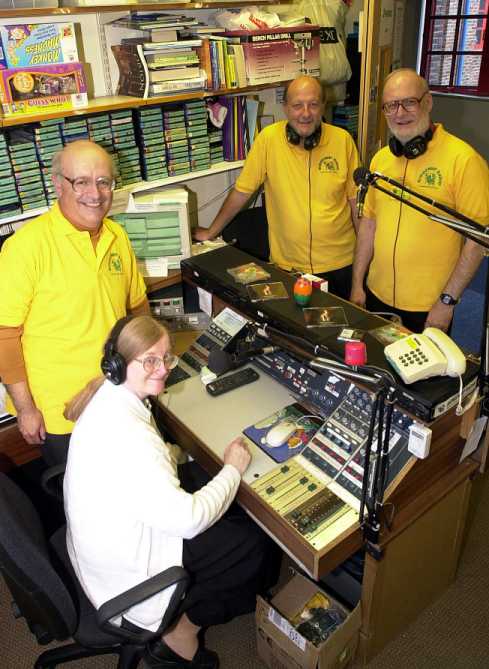 Four of the founders of hospital radio in Dorchester

A life on the radio airwaves

Three DJs were in a spin today after celebrating 35 years with a hospital radio station.

Peter Foster, Andy Venton and Andy Worth all answered the call when a once-a-week station was being started for the patients of Dorset County Hospital in September 1966.The forerunner of Ridgeway Radio was started in the tiny attic of what is now the Dorchester Conservative Club in South Walks.

The first programme was introduced by the then mayor and Lord Lieutenant of Dorset, Colonel Weld, and featured an hour of music a week, piped through to the hospital, which was then in Princes Street, via a landline. The service now operates 24 hours a day and has won national awards for its professionalism.

Peter, from South Court Avenue in Dorchester, who was 19 years old at the time, said: “It was so tiny in the studio then that we couldn’t even stand upright.” The very first broadcast went out at 7.45pm on Thursday, September 30, announced by Colonel Weld, who then handed over to the first presenter, Ken Somerville.” He was the chap who, when this was being set up, arrived at my house armed with this huge reel-to-reel tape recorder for my voice test.”

The most memorable thing about that first broadcast was its failure – we were well into the programme when a matron stuck her head around the door and asked when it was going to start!” There had been a landline failure – but fortunately things went a little more smoothly after the service moved into a studio at the hospital site in 1968, where the new health club is now. The DJs continued to operate their requests show every Thursday night for an hour, trying to avoid the hits that might offend some of the patients, such as Led Zeppelin’s Stairway to Heaven, My Way, or the Monty Python team’s Always Look on the Bright Side of Life. Peter’s wife Heather, who joined the radio station 30 years ago, said: “We were always careful not to play songs that might upset or offend patients, like the Sex Pistols for instance, but sometimes they were requested, so we did sometimes play them.” But I think most people nowadays are able to cope with that sort of thing.”

Over the years the team has conducted interviews with local people and organised numerous outside broadcasts, including all the Weymouth and Dorchester carnivals since the early 1970s. The Fosters started up a slot where they go to London to interview special guests, which have included the former Archbishop of Canterbury Geoffery Fisher, who performed the coronation of the Queen, John Snagge, the BBC commentator who covered the coronation, and Godfrey Talbot, the BBC’s first court correspondent. The couple also go up and cover the Lord Mayor’s Show for the benefit of the hospital’s patients each year.

Andy Worth, from St Helen’s Road in Dorchester, started hospital radio when he was 16 years old and says that the highlights of the last 35 years have been meeting the Queen when she opened the new hospital in 1997 and winning national radio awards in 1999 and 2000.He said: “One of the funniest moments I can remember was when we were doing Radio Herrison years ago.” We had wires everywhere, going through fields, over hedges and round trees to take the broadcast into all the different buildings.” One day some people came in and said, ‘where have you gone – we can’t hear you’, and when we traced the wires back we found a cow, munching through the wires in a field.” Then there was one other time when I was doing a show on the old Dorset FM, which was going out to the hospital, and I gave out the answer to a competition question by mistake.”

We are always trying to do something different and move forward, otherwise we would become just an ordinary hospital radio station.”