Hundreds of cyclists assembled at Watchet Harbour on the Somerset coast to take part in the 9th annual Dorset and Somerset Air Ambulance Coast to Coast (C2C) Cycle Challenge on Sunday 12th May.

The event, which is not a race, has become an annual spectacular and this year was no exception. Of the cyclists who managed to gain a place, 571 turned out on the day, including a total of 41 teams.

There were 549 cyclists who took part in the gorgeous, but sometimes gruelling 54-mile ride from Watchet Harbour to West Bay and a further 22 cyclists who completed the shorter 11-mile route which began at Drimpton and also finished in West Bay.

Once again, Watchet Town Crier, David Milton was great entertainment at the starting line; he ramped up the proceedings before sending the cyclists on their way at around 11.00am. Crowds were seen gathering at various points along the route; cheering and clapping as the cyclists rode past and the four well-stocked pit stops provided a well-earned rest for those that wanted it.

An electric atmosphere began building at West Bay as families, friends and colleagues began arriving in support of those taking part. Many faces basked in the sunshine whilst awaiting the return of their loved ones, colleagues and friends.

Those who took part included former patients who had experienced the work of the air ambulance first-hand, others cycled in memory of loved ones, as a personal challenge to show their support for the Charity, or as a team.

It truly was an emotional day, with so many inspiring stories of courage and determination not only from the participants but also amongst the crowd. 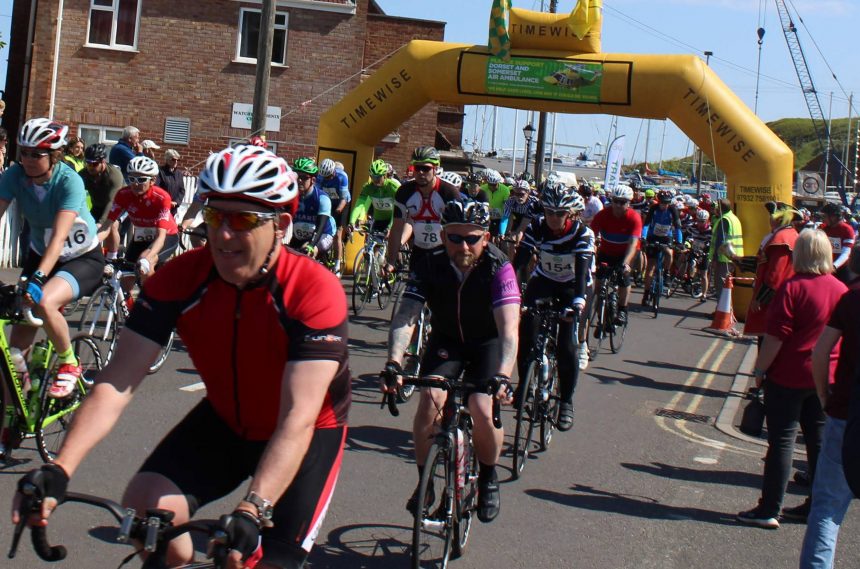 Start of Coast to Coast

Sue Lamb with grandaughter Sienna came along to say thank you