UPDATE: See this story as reported in the Dorset Echo

Budding business entrepreneurs Mary aged nine and Kyle aged eight from Damers First School enlisted the aid of Ridgeway Radio to sell their new product “Spic n Span” that they say “makes everything shine.” They are taking part in the national “Fiver Challenge” competition entered by 1,000 schools introducing pupils in a fun way to financial numeracy, resilience and teamwork. 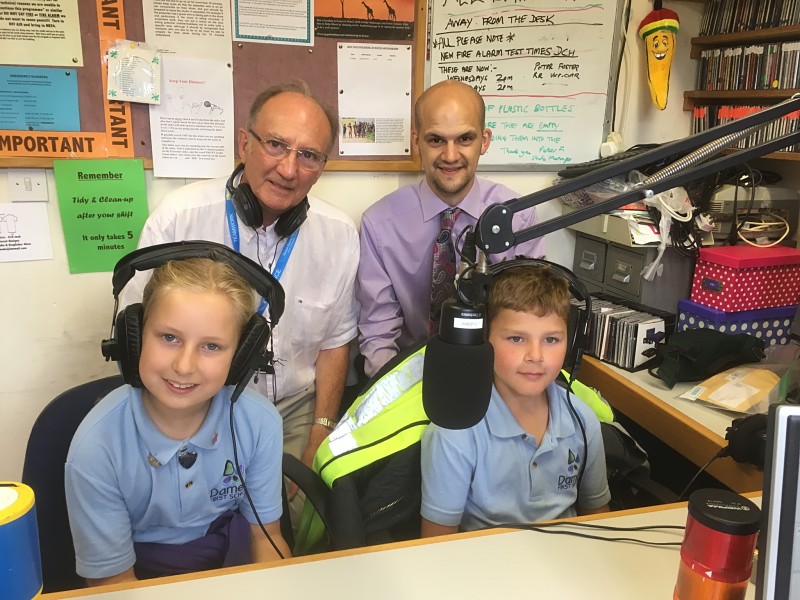 From left, Mary, John, Edd and Kyle in the Ridgeway Radio studio just prior to the interview

The challenge was accepted by18 pupils from Years 3 and 4 the task was to create an eco-friendly product. To help them the “Fiver Bank”, sponsored by Virgin Money, gives £5 for every participating child as start-up capital. The group had one month in which to create the product, design the logo, make a sales pitch to retailers, advertise and sell it from a pop-up shop.

Mary took the microphone first and explained how she had designed the logo featuring a stylised butterfly. She helped with the point of sale material featuring claims for the “ingenious” household cleaning product which dissolves in water.

Kyle told listeners the “Spick n Span” name was his contribution because it described what the product does. “Cleans everything from toilets to ovens,” he told listeners in his sales pitch, “and it’s made from 100 per cent natural ingredients.”

The Damers Eco Club team leader is Edd Moore whose group has sound business form. Last year, it won the competition for five to eight year olds with a product for growing seeds called “Garden Grenades”. The children will be selling “Spick n Span” at the School Fete, Poundbury Farmers Market and outside Waitrose. It costs £2 a packet and comes in three fragrances.

The children’s broadcast was heard on “Ridgeway Magazine” presented by John Shepherd live on hospital radio on Wednesday July 5 at 11am. You can hear that edition of the programme by clicking the Play button below.
Ridgeway Magazine 5th July 2017